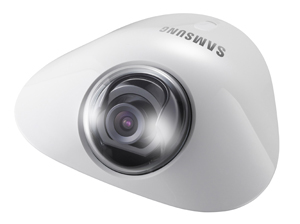 Samsung recently debuted its all new space-saving 1.3MP flat dome camera, which the company added to its affordable LiteNet HD network camera series. The camera itself measures 100 x 115 x 42mm and is designed to provide an affordable HD video surveillance solution for environments where there may be limited space.

According to IP Product Manager for Samsung Techwin Europe Ltd. Tim Biddulph, “As is the case with the other six models in the LiteNet camera series, the SND-5010 is ideal for applications where a large number of HD cameras may be required. Regardless of the number of cameras, the SND-5010’s low price point enables it to be considered as a cost alternative to analog cameras at locations where there may be a need to capture evidence grade images.”

In addition to that, the SND-5010 is ONVIF compliant and supports H.264 and MJPEG compression methods, which allows you to simultaneously stream images to multiple locations at various frame rates and resolutions of up to 1.3MP. Moreover, this camera also supports 16:9 HD display, allowing a number of users to monitor live images at one location, record video surveillance at another location or view live and recorded images  on a smartphone or iPhone via the Samsung iPOLiS application.

This camera is also equipped with a 3mm fixed lens and has a scene change tampering feature which creates an alert if something obstructs the camera lens or if there is unauthorized movement of a camera away from its usual field of view.

There are also a lot of features with the SND-5010, including four programmable Motion Detection zones, 12 programmable Privacy zones and Power over Ethernet. The camera also has a Day/Night feature which automatically configures the camera to capture either color or black and white images depending on the lighting conditions. The SND-5010 also utilizes third-generation Samsung Super Noise Reduction in order to eliminate image noise in low light conditions, enabling bandwidth and recording space savings.