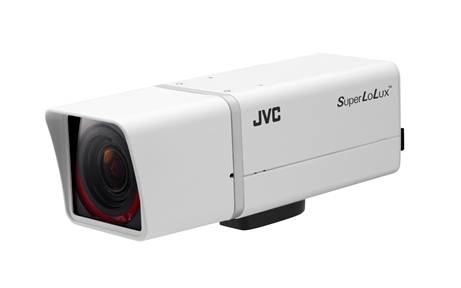 JVC Professional Products Company recently announced its newest products, the TK-C2301WPRU, a vandal-proof analog dome security camera, and the TK-C8301RU, an analog box camera with an integrated lens. Both of these cameras are optimized for True Day/Night entryway surveillance and were previewed at ASIS 2012 in Philadelphia last month.

Both cameras are also equipped with built-in IR LEDs that are optimized specifically to illuminate a wide area at night and expose detailed subjects at close range without white-out reflection.

In addition to that, both cameras offer 600 TV lines of resolution with a 1/3″ IT CCD images and a newly developed 14-bit digital signal processor for high quality images.  Also included is an S/N ratio of 52dB along with JVC’s Super LoLux technology and Clear 5 Meter IR LED, allowing these cameras to provide precise color reproduction, even in zero lux. Moreover, JVC’s ExDR Plus technology automatically produces clearer images for both bright and dark areas.

The TK-C2301 WPRU is also IP66 rated and offers triple axis rotation so you can adjust the angle of your lens with ease as well as an optional heater unit that allows the camera to be used in temperatures as low as -22 degrees Fahrenheit. The TK-C8301RU and TK-C2301WPRU are both currently available for prices of $460 and $575, respectively.

Find out what is going on in the Tech Army World.

What are the Top 10 Money Making Missions?

What other companies have joined and what do they do?

How do I join the
Tech Army Organization ?