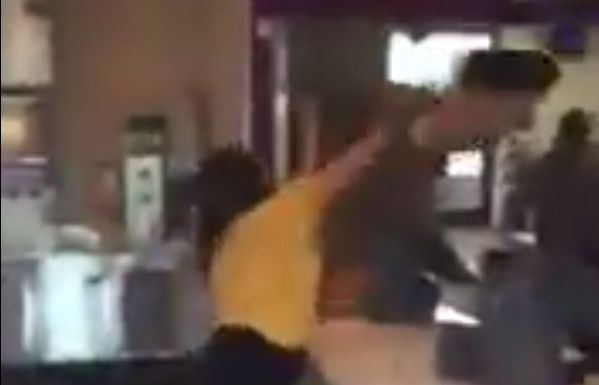 Last time we talked specifically about restaurant security cameras, we talked about how security cameras can help you deal with “dine and dash” incidents. While dine & dashers can hurt your business’s pocket book, it isn’t necessarily the worst thing that can happen in your restaurant. Since extraordinary claims require extraordinary evidence, I can supply images and/or video footage for all three of these incidents. Here are three incidents which are way worse than falling victim to dine & dashers

While this point’s title is definitely an understatement, I thought writing “customers having sex in your lobby” was a little crass for something to be put in a bold heading. A Domino’s security camera caught a couple engaging in sexual relations in the pizzeria’s lobby. The two persons involved were waiting on a pizza, and decided that a Domino’s lobby was a good enough time and place as any. From all of the sources I’ve seen, these two were intoxicated at the time of their improper public behavior. I really hope those sources are right, because if they aren’t that means that both of these people were capable of cognitive thought when they decided to do this. I almost forgot to mention that they got jail time for this.

The footage from this incident does not come from a security camera system,  but it still perfectly displays why having a security camera in your restaurant is a good idea. A former Taco Bell employee supposedly went to pick up her last check, and the situation devolved rapidly from there. Here’s the clip, I know that the quality of the video isn’t all that great, but it’s not one of our cameras so. . .

If the short video I embedded ever gets taken down, just know that several tea dispensers were thrown. Oh, and police became involved and arrested the former employee and her son after some continued terribleness by most parties (excluding the camerawoman) involved.

Compared to our last two entries, this one is pretty tame but as a restaurant there shouldn’t be much more important than food safety. If you don’t want to read or see what may or may not be happening behind the scenes at your favorite local fast food chain, don’t read on or watch the video in this section.

At a Carl’s Jr. in Alberta, Canada, the security camera system caught the co-franchise owner, Jack Webb, doing some questionable things. Since I want to reduce my comma count, here is a list of some of the things Webb was caught doing:

But don’t take my word for it, here’s video footage from the restaurants surveillance system:

The moral of the story is to not get sauce from any Carl’s Jr locations. I’m just pulling your leg, but one real moral of this story is that restaurants should have security cameras installed in food prep areas to ensure that this activity is not something which is a continuing problem in the company. The main franchise owner didn’t take too kindly to Webb’s less than healthy activities, and Webb ended up banned from handling foodstuffs for the franchise until he took a food handling course.

Want to share this story on social media? Use these hashtags! #RestaurantSecurity #SecurityCameras