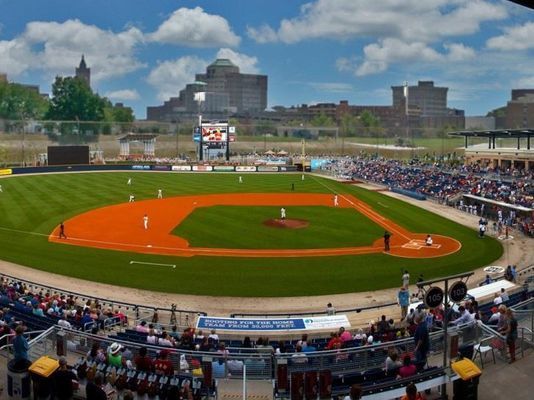 In addition to being hometown to the Joes, the city of Hamilton is the   governmental center of Butler County, Ohio. This Cincinnati suburb is a designated National Historic District. German immigrants settled here back in the mid-19th century. The Germans are known for their work ethic and that heritage reveals itself in this hardworking local baseball franchise.

Being a smaller facility they can be more susceptible to vandalism. Things like graffiti on statuary and concession stands have shown up in the headlines over the past year.

The challenge of keeping semi-pro parks safe is definitely worth the effort and frustration. The Joes have produced their share of Major Leaguers over the years. Teams like the Hamilton Joes offer an important place for players to hone their skills and get vital experience on their journey to the big leagues.

There’s talk of a new field in the works, and the Joes’ management  installed new turf in Foundation Park–their home field–just in time for the June 2017 season. It’s not surprising that the Joes want to protect their vital assets.

So how does a Minor League facility get the most in a security upgrade?

Working within the Joes’ Budget

The GM for the Joes is Darrel Grissom. He definitely did his team a favor calling Camera Security Now for a quote. Our technicians are no strangers to designing surveillance camera installations within budget constraints, and we realized that the team manager has an important responsibility of guarding the team’s assets.

“A good manager,” says Ken Carman, of CBS Cleveland fame, “is worth his weight in gold.”

Carman has worked as a sports reporter for decades. He’s reported on the Minors for sometime. He’s seen firsthand how the manager protects the interests of his players both on-field and off.

Money in the Minors is tight, Carman is noted for saying. The average AA level player makes only about $1,500 a month during the season. Single-A players and rookies make even less–$1k and $800, respectively.

Helping organizations like the Joes stay within budget was a priority to us. Camera Security Now (CSN) was able to determine the most important areas to secure and offer most effective solution for their facility.

Installation Strategies for the Best Outcome

CSN, based in Middletown, is only a couple hours drive from Foundation Park. That kept expenses down for the Joes. But, CSN does business nationwide. We’ve designed and installed systems for organizations across the country. In this case, our close proximity helped keep costs down for the club.

CSN always focuses on the priorities of the organization, and then reverse engineers the system to find the best solution from both a security and financial perspective.

For the cameras facing centerfield, it was simply a question of getting the angle just right to capture the widest frame possible, while keeping sharp focus in on the action, in case footage needs to be retrieved at a later date. Placement at key entry points is another successful strategy we’ve employed throughout the years. We make sure to angle the camera to have the right height, light, and proximity to clearly distinguish facial features of the people in the frame.

Centrally locating the Network Video Recorder was a strategy our technicians used to shorten cable lengths to save money.

Newer Technologies Actually Save You Money

If you’re considering an installation or upgrade, but are unsure of where electrical outlets are in proximity to your camera, you’re fine. Ethernet cable–also known as twisted pair–allows you to deliver power over one strand while moving data over the second. Many surveillance systems these days rely on Power over Ethernet (PoE) technology because you don’t have the added expense of having a licensed contractor install additional power outlets.

Video can consume enormous amounts of bandwidth, so even things like motion sensors and uptime specifications in the settings can conserve bandwidth and keep costs down, and system management within manpower constraints.

Smaller camera units with wide-angle capabilities capture more area in each feed. We used these with the Joes, which got them a bigger bang for their buck.

Things to Consider When Consulting Your Installation Technician

Other important considerations for camera placements:

1. Keep Equipment Out of Reach

2. Outdoor Cameras Need to Be Tough

For outdoor cameras, consider Industrial Grade equipment; extremes in weather, temperature, dust, and the like can affect standard grade technologies.

3. Simplify the Role of Each Camera

Think only one task per camera; don’t try to do any fancy programming–it could be a headache later.

4. Have a Professional Dial In Your System

Balance focus between large field images and needed focus and clarity — professional installers know how to do this; don’t be sorry; do it right the first time; use narrow range images at entry/exit points.

5. Adjust Cameras to Optimize Full Range of Light at All Hours of the Day

Light must be adequate to see facial features; consider the position of the sun at different times of day–too much light can be just as detrimental as not enough

Legal Note: do your homework on privacy laws in your area. While innocently placing a camera, you may actually be capturing some background images that could result in legal action. Again, having a professional do the installation can save you all kinds of woe in the long run.

Clear budgetary picture and installation goals helped CSN to make the best decisions in designing and setting up the video surveillance cameras and NVR for the Hamilton Joes.

The Joes now have clear camera angles for key areas that need to be monitored. This has enabled the team to enjoy greater security without undue financial hardship.

With a new venue in the works, future money will need to go toward building that facility. But, if unexpected delays arise, management can do incremental upgrades until they vacate their current field.

If you have a camera security goal for your property or sport facility, and you’re not sure how you can get the best setup while still remaining on budget, give us a call.

Our seasoned technical staff specializes in turning your security vision into practical reality.

Want to share this story on social media? Use these hashtags! #CameraSecurity #HamiltonJoes