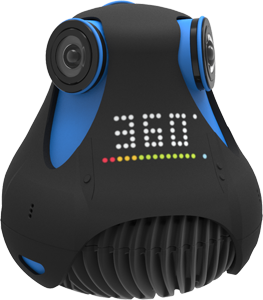 No matter what type of profession you may be involved in, security cameras and surveillance systems are never a bad call. The need for new security camera technology and surveillance features is growing day by day. Criminals are getting smarter and more unpredictable as the days go on. Not all cameras can do what you need them to do, and sometimes you may feel that you have to settle in order to just get the security camera system at all. Criminals can get crafty, and 9 times out of 10, the security cameras that you’re using in your surveillance systems don’t have a wide enough viewing angle to monitor everything you may want to see. You have to be strategic about placement all the time, and hope that you will be able to capture the footage you need to capture. Whether you are inside or outside with your surveillance cameras, you may feel that you always have a blind spot. I’ve notice a recent trend, however. Unless you’ve been living under a rock for the past few years, you know about panoramic viewing. This isn’t something that just comes on your iPhones anymore. This is becoming an entirely new category of cameras. 360 degree cameras are starting to see quite the rise. They’ve not seen their way into the security camera market yet, but this is what I’m trying to get at.

I really feel that 360 degree panoramic security cameras are the next step in surveillance technology.

I’ve seen way too many cameras that don’t seem to serve their purpose simply because of bad placement. You’re typical camera is going to capture the image that you aim it at, obviously. Panoramic cameras capture a much wider view than the standard camera. The 360 panoramic camera captures virtually every angle. It can see in a full circle, and this is something security camera companies should REALLY invest in. The fact that it can see in a full circle is exactly what the worried business owner would need. With this type of camera, placement wouldn’t be an issue anymore. You are covering all entrances and viewing angles.

A new camera called the 360cam from a company called Giroptic is doing exactly this. I know I’ve seen many different 360 degree cameras before, but this one caught my attention. It is designed for basic recreational use, but there was an extra attachment that caught my eye. It comes with a “light bulb” attachment that allows the camera to be screwed into a light socket for “surveillance usage”! This is exactly what I’ve been talking about for a while now! This is what needs to happen. These developers are starting to realize the possible implications of using 360 panoramic cameras for security purposes.

Not only does this camera view in 360 degrees panoramically, but it also view at enough of an upward angle that it can capture 150 degrees vertically. The camera also works in conjunction with the Oculus Rift. For those of us who may own an Oculus Rift currently, you can view live footage from the 360cam directly from the 360cam’s Oculus Rift video player function. Now you’d be able to remote view in an entirely different level. Place the Oculus Rift on your head and be transported to the augmented view of the camera in real space and in real time to see exactly from what angle possible trouble is coming from. This type of integration could be legendary. It’s Kickstarter fund is already way past its $150,000 goal with a whopping 43 days left to go. This is just proof security camera companies and surveillance technology really need to start integrating this type of tech into their products.

Technology is rapidly advancing, and security technology needs to catch up with the rest of the consumer market.

Do You Need Security Cameras? Contact www.CameraSecurityNow.com For A Quote For A Custom Security System At 877-422-1907