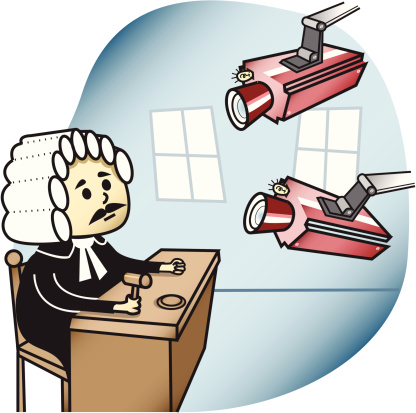 It’s hard to think that there are so many places that are in need of surveillance. We may tend to push these thoughts out of our minds subconsciously, but that doesn’t change the fact that it is part of our reality. Keeping everything safe in a store or a gas station seems pretty easy when you see that they have security cameras in place. It may seem logical for some to have home surveillance systems or CCTV’s set up for their house. It does help give you some peace of mind at night. Then there are the places you may not normally think of when you think of security cameras. The weird part is that you see it all the time and just never put too much thought into it.

The courthouse is a place where you should feel safe, as normally there is a bailiff present to keep everything under control. Even with these fine men and women in place though, a surveillance system may be able to help out a bit more. Court cases can turn violent if the plaintiff or defendant don’t like the outcome of a court case. Though these incidents of violence are rare, it is a huge advantage to have surveillance cameras being monitored in the event that additional security guards are needed.

Think of how quickly the response time for extra security becomes greatly diminished when they are behind the scene watching from a CCTV network. Should something terrible like a shooting occur, or if a defendant/plaintiff starts becoming more and more aggressive, the police and extra security have more time to act accordingly. The violence and aggressive nature may even be able to be stopped before it even starts. Just by placing the cameras within the courtroom, violent acts may be able to be deterred just due to the fact that the ones who may cause the violence are being closely monitored. There is also the use of possible visual evidence should something transpire. Recording all of the video within the courtroom will allow video playback, and that video playback can then be used as evidence should the need arise. Remote viewing is also another nice feature to have when dealing with special cases. Monitor one case on via a network internet connection allowing you to control the camera you choose, all while monitoring other cases via the CCTV network.

There are way too many accidents that happen in the every day world. While you may have certain things to look out for when placing a surveillance system in the courthouse, such as where to place the cameras and where not to, having them in place could easily catch valuable evidence or even save a life. Bad things can happen in the courtroom. While you may not be able read an aggressor’s mind, having the cameras in place to monitor helps security response times, and may be one of the best investments for any court house.