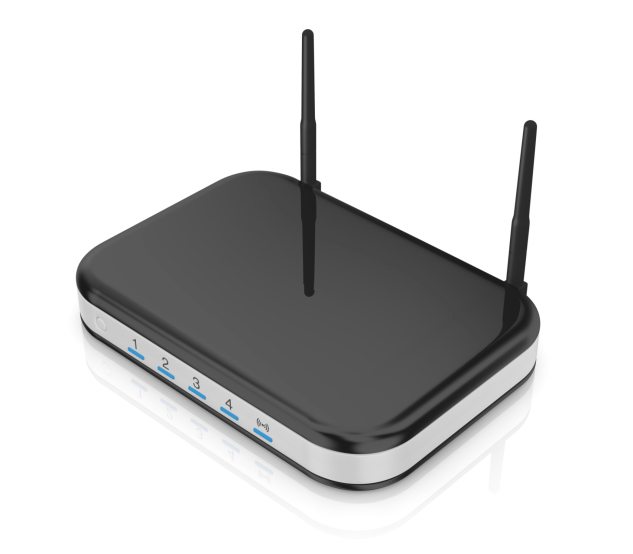 Having a standard security system at your place of business is just common sense. Not only does it help protect you by letting you see whats going on, catching potential intruders and thieves, but they of course also intimidate criminals when they can see the cameras hanging in various places and sometimes stop crime before it happens. This is all well and good, but what if you want to make sure that no one on the inside is messing with your personal space? What about employee theft, or people snooping in your office? There are a few neat little tricks out there, and recording devices that can be hidden in plain sight.
One of the most interesting hidden cameras that I have ever stumbled upon is the Hidden Covert Linksys Wireless Router Spy Camera DVR. It looks like a wireless router… Because It IS a wireless router. It is an actual working wireless router with a video camera hidden inside of it. How clever! If you set this up in your office, or maybe behind the counter at a gas station or restaurant, it would be absolutely perfect.The Hidden Covert Linksys Wireless Router Spy Camera DVR makes stealth recording super easy. It is activated by motion detection, so you’re not wasting recording storage space constantly. It only records when someone enters the room. It will record between 10 seconds and 2 minutes every time it is activated, and the video clips get stored directly to an SD card inside the unit. Every video it takes also has a time stamp displaying the time and date that the video was recorded.
Setting it up is super easy as well. All you do is plug in the power cord, insert the SD card, aim the camera where you want it to record. Any time you want to view the video just unplug the power supply from the outlet, take out the SD card and plug it in to your computer. Done! How much easier can it really get? It even comes with the 2GB SD card, so you don’t have to run out and buy an extra. You are ready to rock right out of the box.
As stated earlier, it actually has all of the same functions as any other Linksys Access Point. The camera itself runs on the same power as the router, so no extra power source is needed. The viewing angles are 80 degrees wide and 70 degrees tall, so you actually have quite a bit of viewing area. The camera also has no lights, it doesn’t beep, or do anything that would give it away as a camera. Also, every video it records is already compatible with Windows Media Player, so you don’t need any special type of software to play it. It is one of the most convenient little cameras ever.
The camera lens is a Sony 4.3mm Color CCD Pinhole lens with a resolution of 640 x 480 and a frame rate of 12 frames per second. As for storage, you can use SD cards or HCSD cards, and any size up to 16GB is compatible. Once you run out of storage space, it will automatically clean up for you by deleting the oldest clip first, so it kind of takes care of itself. Typically, you can get about 3.5 hours of recording time per gigabyte.
For A Custom Quote On A Security Camera System To Protect Your Home Or Business Visit Or Call CameraSecurityNow.com Today At 877-422-1907
Categories: Bartender Theft, Business Surveillance, Monitoring, Theft Prevention
Tags: hidden security, Linksys, security camera, spy cam