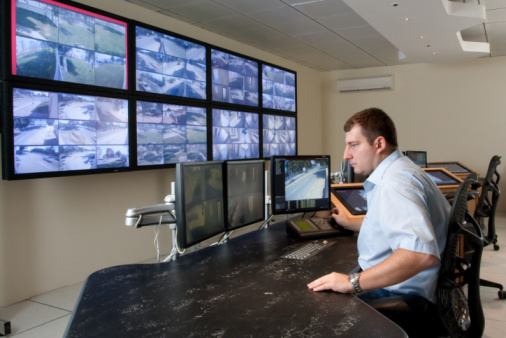 I spy with my eye ….a security camera watching me watching you.

At today’s camera security central the watchers are being watched. Privacy is something that is no longer a right with very few exceptions. Individuals have no reasonable expectation of privacy on public streets, especially in major cities.

Video surveillance is becoming omnipresent. We are all observed constantly, with and without our knowledge. In stores, at the ATM, in elevators, in restaurants, in school hallways, at airports, train stations, and by police patrol cars and road surveillance cameras such as red light and speed cams.

Employers in banks, telecommunications, securities exchange, in hi-tech industries, and in other workplaces use video surveillance in the workplace to monitor employee behavior to chiefly promote safety, improve productivity, and to reduce theft.

Privacy experts worry about the new systems’ Orwellian implications. Photos of suspected terrorists aren’t the only ones that end up in government databases. Digital images of faces caught on airport, red light and speed cameras could end up in national face recognition databases. Now combine those faces with those captured in public spaces with private video cameras. Add in all the photos on state issued drivers licenses. One day it is likely that your face will be on a national database somewhere.

If you can’t beat them, join them. Put your eye on the world with your own security camera. Security Cameras take many shapes and forms, the most common form factors for cameras are dome, bullet, and standard body. Pan-Tilt-Zoom, Low Light, Infrared Low-Light and License Plate technologies can be built into almost any of these form factors.

Here are some tips to turn your eye on them:
-Get a good face shot: Use Higher quality cameras at entry areas
-Use Wide Angle Cameras for large surveillance areas
-Use Bullet Security Cams and Dome Security Cams as much as possible to keep costs low
-Consider Black and white cameras for low light, low cost situations
-Professional, Box or Standard C-Mount Cameras have ability to change out lenses, use them for high quality video surveillance
-Use Pan-Tilt-Zoom cameras for high tech solutions

This blog is dedicated to helping you keep an eye on me.